Farm to School Grant: First End of Year Wrap Up

The first school year of our USDA Farm to School grant is over, and we have done a lot out in Kane County with some wonderful and motivated schools. We’ve worked with teachers (from art to science!), food service directors, cafeteria staff, principals, and of course, lots of great students. With the help of the Kane County Fit For Kids program, we have had a lot of success in our three pilot districts of West Aurora SD 129, East Aurora SD 131, and CCSD 300 in the Carpentersville area. 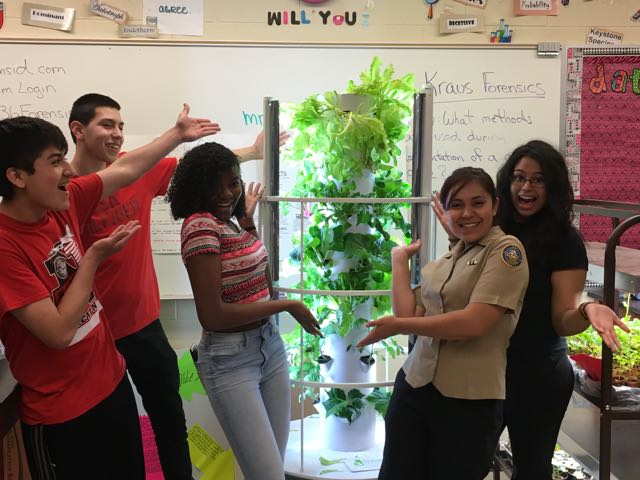 While it took some time in the winter for us to organize our work in the school districts, by the end of the year we were growing and growing – just like the greens on the Tower Garden shown here at East Aurora High School. We installed Tower Gardens across Kane County and will be doing more to share curriculum resources and activities with teachers in the coming school year.

In addition to our direct work in the schools, we have also been hard at work behind the scenes to create an Illinois Harvest of the Month program. The goal of the program is to make it easy for school districts to buy and showcase local products on their menus with a monthly featured item. We conducted lots of taste tests at the pilot schools to develop ideas for what foods and activities work best. In the next school year, our three pilot school districts will begin rolling out Illinois Harvest of the Month! More information (plus a new website!) coming soon.

We are working hard this summer to prepare for the work next school year. We will do more hands on trainings with teachers, food service staff, and even local farmers to help them learn how to participate in the Harvest of the Month program. What we build through this grant will have a long term impact on farm to school throughout the state, and we could not be happier. We’ll share the strategic plan and workshop materials soon. Here are some great photos from the day, including the hands on cafeteria training and lunch! 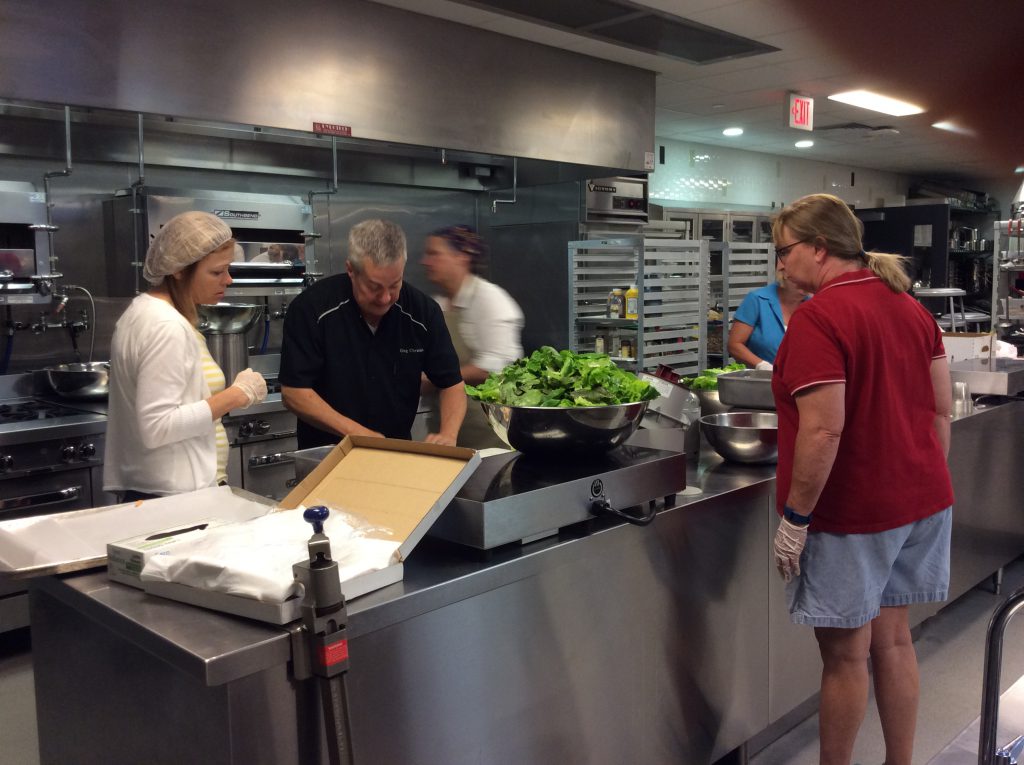 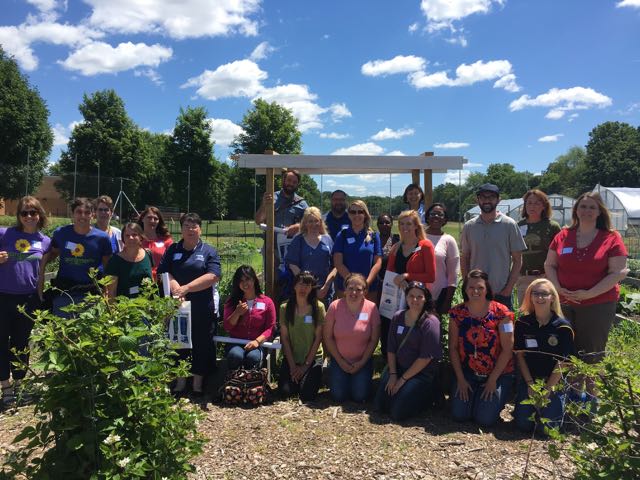 Have you ever passed by a free sample that you didn’t try? Perhaps if you’re trying to rush through the store, but generally, we humans really like to try new things when they’re free! Psychologists and marketers alike have always known this ‘Costco Principal’ – free food just makes people happy… and maybe a little bit more willing to spend money on new products. We like to apply this same principal to students, although we aren’t trying to make a quick buck off of them! The Illinois Farm to School program has been running taste tests at schools in our Farm to School pilot area of Kane County throughout the winter and spring. Our samples are healthy, fresh and tasty. Before handing them out, we tell the students where they were grown and ask them if they can guess what part of the plant the food is. It’s a process that takes just a few minutes, but the students are much more willing to try something new when it comes with a cool story.

What is the reasoning behind these fun, free sample lunch days? Well, studies show that children need lots of exposure to new foods before they are open to eating them more regularly. A lot of the time, we find that students look at the food (a green leafy veg, for example) very skeptically… eat it very skeptically… and then ask for another sample very skeptically! Not all kids enjoy new foods automatically, but being open to trying new things is a skill they need to develop.

These taste tests also help us gauge which locally available items would go over the best if they were to be added to a school menu. Radishes? Maybe not. Hydroponically grown pea sprouts and arugula? Yes, definitely!

Farm to school can be a lot of fun, but it has many challenges. Our taste tests have shown us that with time and repeated effort, many of these challenges are easily overcome. Kids across Kane County are loving their local food samples!

Did you hear that? That was the sound of almost 600,000 students, teachers, parents, and farm to school supporters CRUNCHING into local apples for the Second Annual Great Apple Crunch. Over 850 schools, preschools, colleges, non-profits, state agencies and others across the midwest celebrated National Farm to School Month by crunching into locally grown apples on Thursday, October 22nd.

Participants joined in on the Great Apple Crunch from across the region, including Ohio, Illinois, Michigan, Indiana, Wisconsin, and Minnesota. Over 830 schools and 530,000 students crunched to show their support of farm to school throughout the week –  from small towns like Hastings, MI, and Manitowoc, WI, to big cities like Minneapolis and Chicago. In Wisconsin over 30 orchards participated in the Crunch!

This was the first time participating for Illinois, and we had a strong start with support from schools, students, media outlets, and many organizations. The highlights of the articles that were published online along with links to the original publications can be found below.

Community Contributor, Jay Wojcik, wrote an article for the Chicago Tribune on Oct. 9th. Jay wrote about the activities occurring in Lombard, IL for the Great Apple Crunch and stated the participation of the Healthy Lombard Foundation during this event. Kids were encouraged to join by eating apples at noon on October 22nd or going to their local Jewel-Osco in Lombard, which gave out coupons for apples. Read more here.

Kay Shipman wrote an article on the Illinois Farm Bureau’s 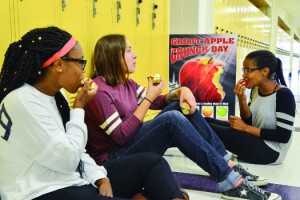 radio and news website, FarmWeekNow.com. Kay wrote about Bloomington High School seniors who were eating local apples prior to the event. Bloomington HS received their apples from local grower, Flamm Orchards of Cobden, IL. Kay interviewed Cynthia Haskins and Kevin Daugherty from IFB, both of whom were invaluable partners with IFSN to make this pilot event so successful. Read the original article here. 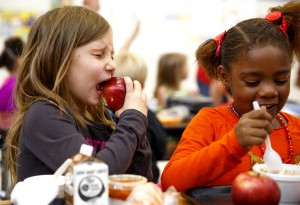 journal, showcasing pictures and events from each day of the week. For october 22nd, the Great Apple Crunch was showcased. First graders from Enos School were shown  crunching into their apples with just a few teeth. Apples eaten in the district were donated by local grower Rendleman Orchards in Altopass, IL. Read more here.

The Bensenville School District posted their activities and celebration for the first Great Apple Crunch on their school website. The school district stated that the students would be crunching into local Fuji and Golden Delicious apples from Michigan.  This event is a way of increasing student education to eat local fruits and vegetables. View their posting here or their newsletter here.

On Great Apple Crunch Day, Kevin Boucher, from WSIU posted a short audio interview with Lydia Mills, SGA Illinois Farm to School Coordinator, and Ulli Tragoudas, Food Service Director at Unity Point School in Carbondale. Lydia can be heard describing the event and its purpose while Ulli describes the excitement and reactions from the students at Unity Point, which is one of many Southern Illinois Schools that participated in the event. The original article and interviews can be read and heard here.

Western Illinois University published a story about their Communicating Agriculture Issues students who have been working on agriculture advocacy projects. One project occurred on Oct 22, during the Great Apple Crunch. WIU students passed out apple slices with caramel around campus while informing fellow students about apple facts and asking them to support local Illinois Apple farmers. Read more here.